It's so much more than a Photobooth... It's a SelfieBox!

So you have heard of the term Photo booth and what is the first thing that comes to mind?
Probably a small curtained structure in which you can sit, at the bowling alley… Right?
Or not? 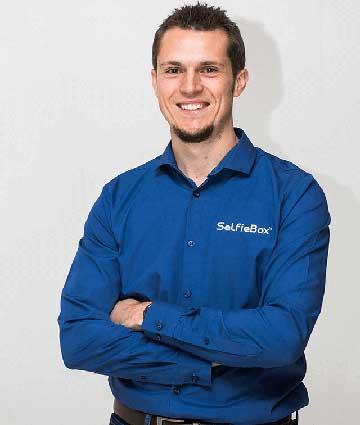 When you think of the term photo booth you picture a small structure with a curtain in which you can sit at the bowling alley or games arcade, possibly even in a shopping mall. The end product is almost always a 4-shot photo strip and very limited design options.

I personally have never favoured these “booths” and to a large extent they have not withstood the test of time. What has remained though is the name “Photo booth” or “photobooth” as some like to spell it. The name is very limiting though, as you are about to find out!

SelfieBox is a photo booth rental company, yet it is so much more than that!

We started in 2015 with our first SelfieBox (which I still think is the coolest name for any photo booth company out there), which was a DSLR based, open-air mobile photobooth. We loved the name so much that we Trademarked it! It was in every sense a vast improvement on any traditional photobooth that had ever been used.

Features like a High-end Canon 7D DSLR camera, a massive 19 inch Touch Screen, 400W Elitar Studio Flash, i7 PC with built-in Wifi, Aluminium chassey, adjustable camera pan and tilt, Top of the range Mitsubishi dye-sublimation Printer (built-in) and the best software at the time – where just some of the reasons why this was so much better than a photo booth.

“We started in 2015 with our first SelfieBox™ (which I still think is the coolest name for any photo booth company out there), which was a DSLR based, open-air mobile photo booth. We loved the name so much that we Trademarked it!”

Added to that was the fact that we could set it up in 15 minutes, probably 10 if we parked really close to the door! And that was with one person setting up. You read correctly – only one person in 15 mins – and that was one of our core features: Less is more. No curtains, railings, plywood, poles or weird structures. We literally rolled in the SelfieBox on it’s wheels, took off the baseplate, inserted the legs and lifted the box, plugged in the power and loaded the event!

We could even set up in the middle of speeches, as it was an entirely smooth and quiet process. Have a look below at how stylish and classy the original Elite SelfieBox™ is!

Over the years, we have added another 7 SelfieBoxes, but we didn’t just stick to the one product. We have expanded with different types of photobooths, each offering something unique and all of them being entirely different to a traditional photobooth. We have also added Video booths and GIF booths. You now have the choice between 15 different types of booths – all the latest and greatest that the industry has to offer.

Therefore, we expanded our reach to the whole of SA and we have successfully done hundreds of multiple box and site events.

Our branches in Durban and Cape Town have expanded rapidly and we can now offer most of the same products as in our Head office in Gauteng. We can cater for any type of event with our range of 44 Photo, GIF and Video booths. SelfieBox truly is the Elite and leading photo and video booth company in South Africa.

So, the next time that you need a Photobooth, think about what it is not… Instead, think about a SelfieBox – it’s so much more than a photo booth